The following coaches are KSB club coaches as they are signed up as current coaches for the club in our current AV membership. Our team of coaches at Keilor St Bernard’s Athletic Club are registered with Athletics Australia and a number are also registered with the Australian Track and Field Coaches Association (ATFCA). There are some coaches who are not club coaches but do coach some of the KSB members. You can read more about below under independent coaches.

For any questions you have about training, you can get in contact with us and we can connect you with any of the coaches listed below. They will be happy to answer your questions.

Ron Stobaus is the head coach at KSB and has been with the club since its founding in 1965. Ron holds the highest level of qualification available which is the level 5 ATFCA (Australian Track and Field Coaches Association). There are not many coaches with this level of qualification. Ron has served as the president of the Victorian Branch of the AT&FCA and was chairman of the Victorian Coaching Committee. Ron has been over 20 years with the Junior Development Group. He is well known for his middle and long distance coaching however due to his experience and qualifications can coach most events to some extent. Ron coaches predominantly at St. Bernard's College in Essendon but also coaches at Keilor Park Athletics Track once a week and athletes are welcome to come and try for a few sessions.

Cathy Matthews has competed and coached at the club for many years. She offers coaching for sprints, hurdles and jumps and is qualified in Level 3 Advance Jumps, Middle and Long Distance, Sprints, Hurdles, Relays and Throws. Cathy also holds the IAAF Kids Athletics accreditation. Cathy offers training at St. Bernard's College in Essendon.

Riley Caines has been coaching juniors as part of the ProActive Development Coaching for the Keilor Little Athletics Club for a number of years. Riley is offering coaching for senior athletes on regular days in long jump, hurdles and sprints at the Keilor Park Athletics Track. Riley holds a Level 2 club coach accreditation and is pursuing a Level 3 performance development coach accreditation. Coaching may be additional to KSB membership by negotiation.

Maria Abfalter has worked as a coach in schools for a number of years and assists with coaching when available at St. Bernard's College in Essendon. Maria holds a Level 3 in advanced jumps, throws, middle and long distance, sprints, hurdles, relays. She also hold the IAAF Kids Athletics qualification.

Krystal Kunig has an interest in coaching Discus and Hammer throws. She has a Level 1 Community Athletics Coaching accreditation and is available on Sunday mornings at Keilor Park Athletics Track by appointment.

Ian Upton has been heavily involved in KSB for many years. He is a jack of all trades! Ian assists with training at St. Bernard's College and Keilor Park Athletics Track as required. Ian holds a Level 1 Community Athletics Coaching accreditation.

There are a number of coaches who are independent coaches and coach athletes from a variety of clubs. Please see list of coaches below that currently train and are willing to train KSB members. We are happy to put you in contact with these coaches if you're interested in finding out more about their training sessions. 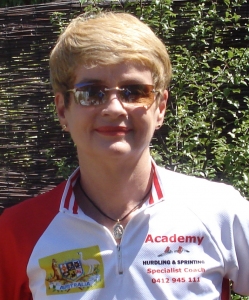 Maureen Reynolds is an independent Specialist Coach who Founded Academy of Hurdling which celebrates its 30th Anniversary in 2021. Passionate about coaching hurdles with a focus on Advanced Technique Development, Maureen offers personal coaching at a number of venues and is interested in offering coaching at Keilor Park Athletics Track in the near future. Maureen also is one of the select few coaches to hold the Level 5 ATFCA accreditation. Coaching is additional to KSB membership.

Scott Sidley has been coaching a variety of athletes for a number of years at the Keilor Little Athletics Track. Scott has worked with local schools, little athletics children as well as senior athletes in the sprints, hurdles, jumps, throws and multi events. All training is by prior arrangement only. Scott holds Level 2 Advanced Jumps, Advanced Sprints Relays & Hurdles and Intermediate Club Coach accreditations and also has the IAAF Kids’ Athletics Coach certification. Coaching may be additional to KSB membership by negotiation.

Bill Georgantas is an independent coach who has coached Pole Vault for more than 10 years. Bill coaches Pole Vault at a number of venues and is by appointment only. Bill currently holds a Level 2 Club Coach, Level 3 Performance Development and Level 4 Specialist in Jumps accreditations. Coaching is additional to KSB membership by negotiation.

Brett Hardeman is passionate about coaching throws. He has started his own squad called the Altona Throws Squad which welcomes athletes from a variety of AV clubs such as KSB. Brett holds a Level 1 Community Athletics Coach accreditation and coaches using the Throwing Chain Reaction System. Brett offers squad training 2 -3 times per week in Altona. Coaching is additional to KSB membership.

Madeleine Feain has been involved with athletics for a number of years. Maddy has been working with schools and also coaches little aths children as part of the ProActive Development Coaching for the Keilor Little Athletic Centre. Maddy holds a Level 1 Community Coaching accreditation. Coaching is available by appointment and may be additional to KSB membership by negotiation.

Randall Scott has coached for KSB for many years in the sprints, throws and hurdles. Randall holds a Level 3 in Advanced Jumps and Throws, Level 4 Specialist in Development Coaching, Sprints, Relays and Hurdles. Randall also holds the IAAF Kids' Athletics Coaching qualification. Coaching may be additional to KSB membership by negotiation.

Jackson McMenamin has been involved with athletics as a member of both the Keilor Little Athletics Centre and KSB for the past few years. Jackson has been coached by Scott Sidley in the High Jump and is currently pursuing a Level 1 Community Coaching course. Jackson is available by appointment only and coaching is additional to KSB membership by negotiation.